Why Roger Raglin Chose a .270 Short Mag for His Custom Bergara Rifle 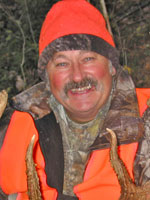 Why Roger Raglin Chose a .270 Short Mag for His Custom Bergara Rifle

Editor’s Note: Roger Raglin of Coweta, Oklahoma, has been a TV host for 15 years. His TV show “Roger Raglin Outdoors” airs at 9:00 pm on Saturdays on the Outdoor Channel. He is also a member of CVA’s Pro Staff. Bergara, a part of Black Powder Inc. (BPI), the parent company of CVA, has opened a Custom Rifle Shop to build custom rifles using component parts customers request or send to Bergara. Roger Raglin was one of the first outdoorsmen to have a custom-built Bergara rifle. Today he tells us why he’s chosen a custom gun.

I was in a hunting camp with Nate Treadaway, and Nate had a custom-built .300 Bergara gun. I checked the rifle out and was very impressed with it, so I decided to have a .270 Short Mag custom-built by Bergara’s Custom Rifle Shop. I’ve hunted with a .300 and taken game, but 5 or 6 years ago a friend of mine offered to build me a .270 Short Mag. I was really impressed with how flat that rifle shot, and it had tremendous knock-down power with a 140-grain bullet. You can shoot big magnum calibers and enjoy it, if you don’t mind a substantial amount of recoil. But with a .270 Short Mag the recoil is drastically reduced, which means I can shoot it, my son can shoot it, and just-about anyone else who hunts with me can shoot it. I’ve hunted all my life, and I don’t really feel that I need to try and impress someone by hunting with a rifle that kicks like a young mule. I started shooting magnum rifles in the mid-1980s. I had an old pump .30-06 that had been passed down in my family from generation to generation. I traded that rifle in for an ultra-light 7mm. Every time I took an animal with that rifle, I wondered which one of us took the worst beating, me or the animal. That rifle would rock you back on your heels. I decided I needed to shoot a .300 Mag. I knew I could put recoil-reduction products on a .300 Mag, but what you lost in recoil, you would make up for in volume. Anyone within 100 yards would feel their ears tingle when you shot a .300 Mag with a muzzle break.

My first hunt with a .270 Short Mag was in South Dakota on the Standing Rock Indian Reservation. The area we were hunting wasn’t far from the Canadian border, so the deer had fairly-big bodies. The first afternoon I hunted this property, I saw a monstrous 160-class buck walk into an opening 158-yards from me. I took a rest against a tree, and because my rest wasn’t really steady, I took a shot that I called a safe shot. I put the crosshairs behind his shoulders. Then I moved them back, which would be considered a mid-body shot where I thought I could take out both lungs and the liver. Most of the time this shot would require some blood trailing, but when I squeezed the trigger on that .270 Short Mag, that big buck went down like someone had hit him with a sledgehammer. I thought I must have shot high and hit the buck in the spine, because I never had seen a deer drop like that when I’d taken a safe shot.

When I got to the buck, I saw I’d hit him exactly where I’d aimed. That deer was so big that my young, muscular cameraman and I almost couldn’t get him in the back of the truck. I couldn’t believe a bullet coming out of that Short Mag had enough energy to instantly put down a big deer at 158 yards. That was when I became convinced that this was the caliber I needed to be shooting for any game in North America. So, I was excited about having the Bergara Custom Shop build me a custom .270 Short Mag. I recommend this custom rifle to all my friends and TV viewers.

The Right Loads for your Gun

As technology in the firearms industry progresses, more guns than[...]