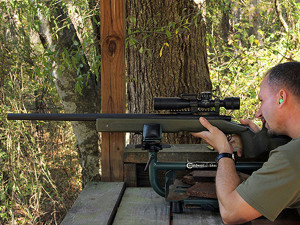 For safari hunting, I recommend Bergara’s long-range hunting rifle, the BCR15. For this gun, I suggest a long action and a caliber from the .375 H&H Magnum up to a .500 Nitro Express. I’d start with the Bergara barrel with a Stiller’s action and a McMillan stock, unless the customer preferred different components. I recommend an Aimpoint scope that allows you to acquire the target very quickly. With iron sights, you’ll have to align your sights, but with an Aimpoint sight, your point of aim is your point of impact. The red dot automatically centers on the target, and it’s much faster to acquire that target than with iron sights or crosshairs. I also recommend a muzzle brake to help reduce the recoil.

Of course you also need a good trigger like the ones made by Timney. The Timney triggers on all Bergara custom-built rifles are produced exclusively for our custom shop with a wider shoe for your finger to press, to distribute the weight of your finger more evenly across the trigger. We can have a heavier trigger pull, for instance 3 pounds, but most shooters swear we have set the triggers on our custom-built rifles at 2- to 2-1/2-pounds, since they feel lighter than they are. We have some customers who want a 1- or 1-1/2-pound trigger pull, but that really isn’t as safe in a hunting situation. For instance, if the shooter’s wearing gloves, putting the slightest bit of pressure on a light trigger can cause the rifle to fire before you want it to fire.

If a hunter plans to hunt elephants exclusively on his safari, I recommend the .500 Nitro Express caliber, since it has the largest bullet. When I take the shot on the elephant, I want to make sure the animal goes down where it’s standing. When hunting water buffalo, you may want to consider the .375 H&H Magnum caliber – possibly the best caliber for all the African dangerous game, with the exception of the elephant. This caliber is a hard-hitting and flat-shooting caliber out to about 250 yards. To take dangerous African game, the hunter’s accuracy and ability to place the shot where the bullet needs to hit is the most-important element for success. We at Bergara can build the finest custom rifles, but if the shooter doesn’t spend time shooting his rifle and becoming proficient with it, the quality of the rifle doesn’t make much difference. Most accuracy problems occur due to a lack of shooting skills, rather than the rifle being built improperly. 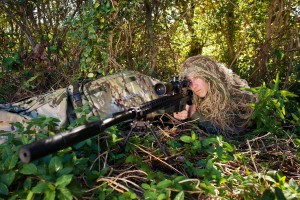 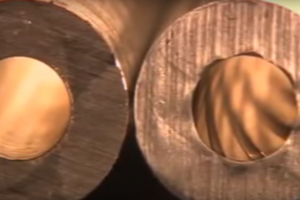 Varmint hunting has grown in popularity over the last few[...]