Save a Fawn, Hunt a Coyote

The howls sent chills down my spine. They always do. Ever since I was a boy on my first deer hunt in Texas. The eeriness of those high-pitched wales in the predawn darkness sent me into the floor of the box blind overlooking the vast tangle of mesquite. If I laid down, they wouldn’t be able to see me. Nearly 30 years later, on a humid southern summer evening, that same hit-the-deck feeling flooded my nervous system though I didn’t dare move more for fear of ridicule than scaring the dogs before my hunting buddy and I had a chance to shoot. Minutes later, however, our rifle reports echoed through the Tennessee hills as one; two less predators would roam the woods.

Most important is where and how you choose to setup. Actually, let’s back up for one second. The first consideration before you put in the work to hunt coyotes is making sure they are in the area. Sit in the dark and listen, you’ll know.

Hunt in a wide open space if you can help it. So much of the landscape east of the Mississippi River is densely wooded, allowing limited visibility. Folks in the Midwest and beyond have it pretty well made to see long distances. Get up high where you can see as much of the surrounding landscape as possible and nothing can surprise you from behind as you sit with your face in the wind.

Once you begin calling, sit still with your rifle at the ready. If you’ve never killed a coyote despite repeated efforts, we can guarantee it’s not because you haven’t called one in. They are wily creatures and the epitome of stealthy.

Even though a lot of varmint hunters are using AR-style semi-automatics to hunt coyotes these days, some of us are still proponents of the bolt gun. While a 30-round clip is great for sending multiple warning sounds to every coyote in the county, the notion of working a bolt makes you take your time and shoot wisely. Plus, bolt-action varmint rifles are way more accurate. A smaller, soft-kicking caliber, such as a .22-250 or .223, will enable you to recover quicker after the shot.

With so many to choose from on today’s market, where do you begin? For starters, we would suggest a riflescope with a big ocular lens that allows a lot of light to pass through to your eye no matter the lighting condition. Let’s assume you’re hunting in the early morning and late evening. (If you can legally hunt at night, yet don’t own the fancy lights or want to pay the price for a night-vision scope, an old-fashioned spotlight, especially in the glow of a full moon, works well.)

Coyotes are notorious hunters of the night, when the air has cooled and the wind is down. This allows them to smell and hear much better. However, they can also be killed during the day. A 4x-5x zoom scope is a good bet for short- and long-range shots. So, a large ocular, good zoom and if you can, throw in a BDC reticle, and you’ll have a pretty fine varmint hunting riflescope.

Calls are important to both locate ‘yotes and draw them in. For the sake of argument, we like an electronic call, especially for novices, that emulates the sounds of stress that draw in hungry predators. And they allow you to remain hands free.

There are a few useful decoys available. In fact, you can actually buy a call with a spring-loaded tail that flips back in forth while the call is in use. Other companies, like Montana Decoy, offer a rabbit decoy (good for distress calls) and a coyote decoy (good for howling, with the effect of trying to draw in a potential mate). Decoys aren’t as important as the call, but they can help bring weary coyotes into shooting range. 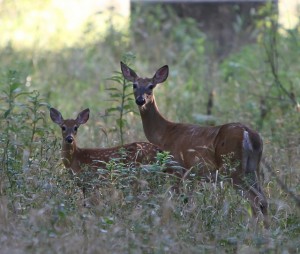 Coyotes are notorious for targeting fawns and does during the birthing period in late spring and early summer.

Just last week I was walking the same property where my buddy and I found recent success and spooked five buzzards that had been sitting on the ground. And rarely does a buzzard sit unless it’s feasting. The skeleton was still intact and it didn’t take a forensic scientist to quickly identify the remains of a fawn. The grass was matted where those damned ol’ coyotes had dragged it down then laid around while they took turns on the young, tender meat.

The farm, as far as I know, hasn’t been hunted much over the years save for the few days I make use of my free time. Turns out I’ve been itching to shoot my Bergara BCR24 Varmint Hunter in .22-250 Rem. a few more times before deer season begins. And if I can save another fawn or two by killing a few more coyotes, well, it seems I’ve just made weekend plans.