“No, you durn fool, slide it up over the saddle.”

If you’re a hunter with a natural penchant for everything outdoors and haven’t seen Jeremiah Johnson, then you’re probably not reading this blog. A man grown tired of society, he rode west till the sun set and turned left at the Rocky Mountains to find bear, beaver and other critters worth cash money when skinned. Life was tough for Jeremiah as he learned to live in the elements, trap and kill game and fish, and become a good shot with his Hawken .50 caliber. 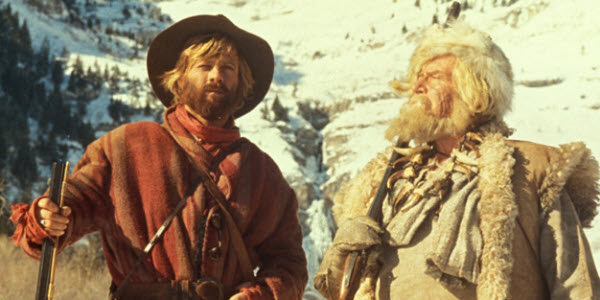 But as luck would have it, he stumbled across (quite literally) a mentor. Bear Claw Chris Lapp taught Jeremiah how to survive and even thrive in the hostile Rocky Mountains through the four seasons. He taught him that elk don’t know how many legs a horse has and that the most critical part of the shot was finding a good, solid rest – right across the saddle.

Today, along with every other piece of hunting equipment, we have modernized the rifle rest whether it’s a bean bag or a bipod. But then again sometimes you just have to use what’s there.

On an axis deer hunt several years back in southwest Texas, we spotted three nice bucks on the way to the stand. The ranch hand asked for a volunteer to hop out and attempt to put the sneak on them so I quickly volunteered. For several hundred yards I hugged mesquite trees, constantly wary of cacti and rattlers as I kept tabs on the bucks’ progression. Finally, I made it to a clearing. The bucks grazed just on the other side and were actually working their way back toward my position. Again checking the ground for anything that might stick or bite, I plopped down, slipped off my backpack and laid it across my knees. The pack held a flashlight, pocket knife, some candy bars and most importantly, a jacket that provided a cushion to allow the rifle to sink down and stay still as I lined up the crosshairs. With nothing to lean back against it was one heck of an ab workout though I was able to keep my rifle steady across the backpack until the buck I wanted to shoot stepped broadside into the clearing. Come to think of it, axis meat is some of the best I’ve ever eaten.

Then there are the backcountry hunts that end on the way to basecamp or in the eleventh hour. Sudden movements simply won’t fly and jerking your rifle from its scabbard and firing away atop a horse is something the guide likely won’t allow, for your sake. Slowly slipping down off the horse, “slide it up over the saddle.” A good horse won’t move while you aim or flinch when you shoot. Afterward, if you make a good shot, he’ll even help haul out the meat.

Rattling, stalking or caught unawares while walking through the woods, the tree fork is your friend. The margin may be small however, as you can’t exactly move the tree with your target to line up the shot.

These add some weight to your rifle, but from the prone position provide a nice rest. If your hunting day consists mostly of watching a large clearing or overlooking a valley, the bipod/tripod option is a good way to go.

If you’re surprised and a quick shot is necessary, freehand (or offhand) it is. In a recent blog, we talked about the importance of learning a good athletic stance and being able to shoot standing up, freely holding your rifle. Sometimes old mature bucks will try to let you walk by them before breaking cover and hauling butt. If you’ve practiced enough, those learned abilities will naturally take over when time is of the essence.

Raise your hand if you have this friend. Or two hands and a pat on the back if you’ve been this friend. What led us to that situation? Desperation, probably.

If you’re the rest, plug your ears tight and get your tongue somewhere safe. If you’re the shooter, whether you connect or not, find out what this friend drinks and buy him a bottle of something better.