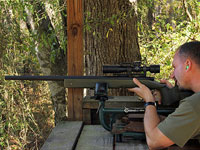 Dan Hanus, a veteran with the United States Marine Corps, specialized in building precision weapons. Hanus and his team built Marine Corps sniper rifles, combat .45 pistols and long range M14 rifles for the Marines, Special Ops and the Marine Corps Rifle and Pistol team. Today Hanus leads Bergara’s Custom Rifle Shop. He brings to this new division of Bergara more than 22 years of experience blending component parts and having the gun-building skills to produce some of the finest custom rifles in the world. According to Hanus when I talked with him, “In our Custom Rifle Shop at Bergara, we offer wood stocks, laminate stocks and fiberglass stocks. Then, we bed the barrel into that stock and build a complete gun off of the Bergara action. If you prefer a different action, we’ll build the gun with the action you want us to use. If you have a different barrel you want us to use, we can bed that barrel. One of the big differences in the guns coming from the Bergara’s Custom Rifle Shop and factory-built guns is that through every step of the gun-building process, the customer is in complete control of the component parts we use to build that customer the most-accurate rifle we can produce, using the parts that the customer chooses.”

Bergara’s Custom Rifle Shop also does trigger work. The weight of the trigger pull is very critical to the accuracy of a rifle. Sniper rifle’s triggers have about 3-1/2-pounds of trigger pull. And Hanus says, “We can put this same weight of trigger pull in the custom rifles we build here at Bergara’s Custom Rifle Shop.” A light trigger pull allows the hunter to concentrate more on keeping the correct sight alignment to the target, without interrupting that alignment, as he or she pulls the trigger. The Bergara rifle is a sciller action and utilizes a Bergara barrel, a McMillan stock, a badger bottom metal, which can either be a four plate or magazine fed, and a timney trigger. However, the customer still has the option to change any of these parts, before the building process begins. Hanus explains completely building a custom Bergara rifle requires about 2 weeks. “If the customer requests, we can send the target that we’ve shot with this rifle, when it’s delivered to him/her,” Hanus reports. “We recommend the Vortex scope, but we can put any scope on your rifle that you choose.”

Right now, the Bergara Custom Rifle Shop is building .308s, and it will build rifles from .243 caliber, all the way up to a .338 caliber. When we asked Hanus why his standard caliber was a .308, he explained, “The .308 caliber has stood the test of time with proven accuracy and is one of the best-performing calibers on the market today. You can find ammunition for the .308 almost anywhere. The U.S. Marine Corps has been using this caliber for its sniper rifles for years. I believe it has the sufficient energy and range to take down any big-game animals in this country. I believe that bullet placement is far more important than knockdown power. You can shoot an animal with a .50 caliber rifle, but if you don’t shoot the animal in the right spot, or you miss the animal, that big bullet with a tremoudus amount of knock down power does the shooter no good.”

I’ve said for years that the caliber of rifle you shoot is not nearly as important as where you place the bullet. I have been criticized by “gunny” writers for saying good marksmen can shoot small calibers and take game efficiently. Shooters that are less accurate have to use bigger calibers to make-up for their lack of accuracy. If you have the skill in shooting to shoot minus one minute of angle at 100 yards, the Bergara Custom Rifle Shop has the ability to build a rifle that can deliver that kind of performance. Hanus explains that “The standard rifle that we build in the Marine Corps is the M40 Series sniper rifle. The M40 started back in the 1970s and has evolved to the M40A5, which the Marine Corps snipers currently use today. These guns have phenomenal accuracy, considering they aren’t combat guns. They range anywhere from 800 yards to 1,000 yards. Our U.S. Marine Corps Shooting Team, in 2003 won the national championship with some of the guns I helped build.”

Since Hanus has been with Bergara, the most-popular gun built in the Custom Rifle Shop is the standard .308 Sporter, a lightweight gun at 7.2 pounds in the .308 caliber. Too, many outdoorsmen like this caliber as a hunting rifle. At the SHOT show in January 2013, the guns that Hanus and his team has built for Bergara drew a lot of attention from show attendees. When I asked Hanus what he thought the future of the Bergara Custom Shop looked like, he answered, “We are looking at the possibility of promoting custom-built long-range shooting rifles, an area that the shooting market is moving toward.” The easiest way to contact Hanus and the Bergara Custom Rifle Shop is to go to www.bergarusa.com. Bergara expects its Build a Gun website to be up and running soon, where you can  go pick and choose your components, and actually be able to build your rifle from these component parts, before the Custom Rifle Shop ever starts putting your rifle together. So, stay tuned. The consumer is really going to be excited about the price of these custom-built rifles. So, if you have always dreamed of having a rifle built just for you, from the parts that you select, start picking now your components for your dream rifle.