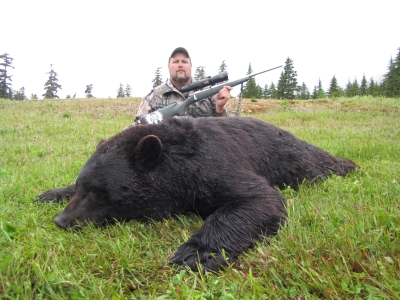 It was the last day of my bear hunt in coastal British Columbia and it had been a long ten days. While the hunt started with me taking the new world record grizzly using my CVA Accura featuring a Bergara barrel, the days in between were filled with futile stalks and long boat rides to more remote hunting areas in search of a record book black bear. On the final day we decided to move on land and hunt a series of old logging roads and cut blocks where the green up and grass were bringing the bears out in numbers, and while the weather was starting to turn sour our day was brightened when we spotted a Kermode bear. I took this as a good sign of things to come because not everyone gets to see the rare Spirit Bear.

After spotting only a few bears and with daylight fading fast we spotted a big bear feeding along the old logging road and walking away from us.
My friend Phil Phillips was along and we had decided to go “Pope and Crockett” on all of our stalks that day. Meaning we would stalk the bears together and if we got into range for him to take a bow shot, he had first chances… if not then I would take the shot with my .338 Winchester Magnum Bergara custom rifle. We moved in quickly on this bear and closed the gap to 50 yards but as the bear was about to turn broadside Phil tripped on a willow limb in the road the noise spooked the bear into the brush. I quickly moved up the road and around the bend with my cameraman and watched as the bear came into the open almost 300 yards away. There was no time to try another archery stalk so laid prone and used my pack for a rest, the Burris Eliminator Laser scope gave me the range of 276 yards and the dot for the yardage. I don’t even remember pulling the trigger on the custom Bergara .338 Winchester Magnum but when the bear dropped in his tracks I knew the 225 Grain Cor-bon T-DPX bullet had found its mark and took out both shoulders.

It was well after dark when we got to the bear so we shot video and photos the next morning. I remember the size of the bear and how he filled the bed of the Ford F250 pick up and how it took three of us to load him that night. It was the thrilling end to a world class hunting adventure that I will never forget.

Equipment notes: My rifle on this hunt was the Bergara custom rifle on a Remington Model 700 action in .338 Winchester magnum. I used my 225 grain Cor-bon T-DPX ammunition and topped the rifle with the Burris Eliminator Laser Scope…. this is in my opinion the best rifle, caliber, ammo, and scope combination that I have ever shot to date.

The number-one ingredient required to make consistent long-range shots on[...]